This website includes a large number of articles about various aspects of square dancing. It hasn’t been updated in a while, but there are some informative articles in the collection.

WordPress.com is excited to announce our newest offering: a course just for beginning bloggers where you’ll learn everything you need to know about blogging from the most trusted experts in the industry. We have helped millions of blogs get up and running, we know what works, and we want you to to know everything we know. This course provides all the fundamental skills and inspiration you need to get your blog started, an interactive community forum, and content updated annually.

The usual order of the programs is Basic, Mainstream, Plus, Advanced, and Challenge. However, several variations of entry programs have been proposed. This chart gives a visual representation of the differences between several square Dance entry programs. The totals on the right indicate how many times a particular call has been included in one of the programs. The higher the number (and the darker the colour), the more popular the call is.

In 2013, the US government shut down over arguments about the federal budget. The very funny people at The Onion decided to refer to the shutdown as a hoedown, and included many references to square dancing and other kinds of folk dances in the article.

While many bemoan the decrease in square dancing around the world, it seems that square dancing terms can still be used and generally understood in popular media. Square dancing is still fairly well-known, if not well-practiced, at least in the United States.

The association between square dancing and right wing (Republican) thinking is also apparent in this article. I do wish that association didn’t exist. I like my hobbies to be non-partisan…

The title says it. Not a square dance. But I’m not sure whether this jazz piece was given this title because it has elements of square dance-type music (does it?), or if they just called it this to be cute. What do you think?

The CALLERLAB Music Producers’ Committee has updated their website, musicforcallers.com, and made it awesome! You can click on the name/logo of one of the record labels on the front page to go to that label’s website, or you can click on “Search for Songs” to search the combined database of multiple producers. Well done, guys!

I have heard of square dancing tractors, but I didn’t realize there were also square dancing helicopters! I’m going to have to make a whole new category for this!

Trailer for Do-Si-Do in the Sky

You can rent or buy the video through Vimeo.

More information about the project to get this movie made on Indigogo:
https://www.indiegogo.com/projects/do-si-do-in-the-sky-the-u-s-army-helicopter-square-dance-team#/story

There is also a book about this phenomenon:
Dancing Rotors by Jr Gilliand

This book covers all the bases starting with the new caller just learning how to call and on through the old hands looking for ways to expand their collection of modules and to learn new tricks on how to use square dance modules to improve their calling skills. It’s all there.

You can contact Calvin to purchase the book at this link:
http://d4bp.com/wp/square-dance-modules

“Dancing for Busy People” is a collection of over 400 dances using easy to teach dance movements. Most dances use only walking movements based on commonly used square dance terminology. Only 25 basics are used. The same basics are used for contra dances, trios, quadrilles, Sicilian circles, mescolanzas and many of the round dance mixers. Some special description of footwork is necessary for the no-partner dances.

You can contact Calvin to purchase the book at this link:
http://d4bp.com/wp/the-book-d4bp

Ken Sale asked the following question in a Facebook group for square dancers.

What words or phrases come to your mind when you think about why you square dance?

Within a few hours, he created the following word cloud with their answers. 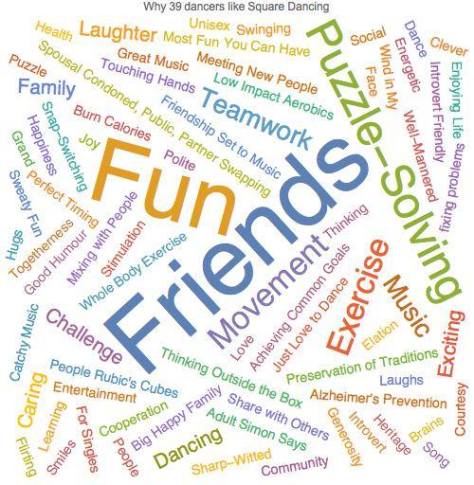 Longer dresses were more common in earlier times, so why don’t we wear them? And bonnets, too? Of course, the answer is that the times changed, and so did the dress. But then, somehow, our idea of what to wear got frozen in time. Is it time to reconsider our anachronistic costumes? 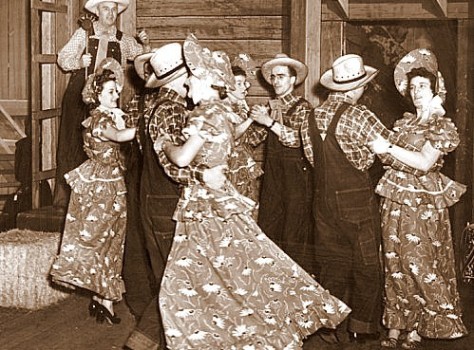 The Problem with Square Dancing Today

Every Argument About Square Dancing Ever

Various resources about the art and sport of square dancing