Spade Cooley was a famous musician and actor in the 1940s to 1950s. His career was prematurely ended when he was convicted for the murder of his wife in 1961. He died while on a 72-hour furlough from prison in 1969. 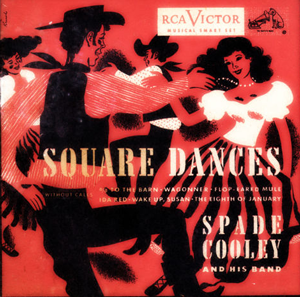 This is a little box set of Spade Cooley 45 RPM square dance records without calls. The records were in great shape. Strange green color translucent vinyl. Tunes included Ida Red, To The Barn, Flop Eared Mule, Waggoner, Wake Up Suzie and Eighth of January. If you don’t know Spade Cooley you could sum up his music by saying he’s the Spike Jones of Western Swing music.

Listen to the album on Soundcloud:

The Problem with Square Dancing Today

Every Argument About Square Dancing Ever

Various resources about the art and sport of square dancing